Outlines of our researches

Short-term memory (STM) lasts for a few hours after learning and is defined as a “labile” memory. To store an STM for a long period of time, a labile STM must be stabilized as a long-lasting long-term memory (LTM) through a process known as “memory consolidation”. The most important biochemical signature of consolidation is the requirement for new gene expression. Our previous study using conditional mutant mice showed that cAMP responsive element-binding protein (CREB), a transcription factor, and Ca2+/calmodulin dependent kinase IV (CaMKIV), an upstream kinase of CREB, activate gene expression required for memory consolidation. Importantly, by genetically expressing dominant active mutant CREB or CaMKIV in the forebrain, we have generated transgenic mice (“smart mice”) showing enhanced memory consolidation. 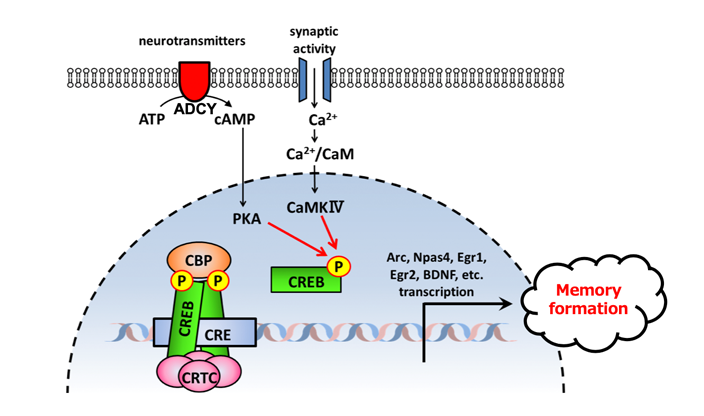 Notably, a retrieved fear memory is maintained or enhanced through memory reconsolidation, whereas the retrieval of a fear memory also initiates memory extinction, which is a process that weakens the memory. In contextual fear conditioning, brief memory retrieval (e.g., by 3-min re-exposure to the context in our experimental condition) induces reconsolidation, whereas extended retrieval (30-min re-exposure) extinguishes this memory. Thus, memory retrieval induces two opposing processes (reconsolidation and extinction). We have investigated the relationship between these processes and found that (1) reconsolidation and extinction are not independent processes, but rather interact, and (2) an active transition functions as a switch from reconsolidation (fear) to extinction (safety). We are now trying to understand the mechanisms of this active transition at the molecular, cellular, and circuit levels. These studies will help to identify the biological basis of adaptation mechanisms to environmental changes (such as “fear” to “safety”) in the brain. 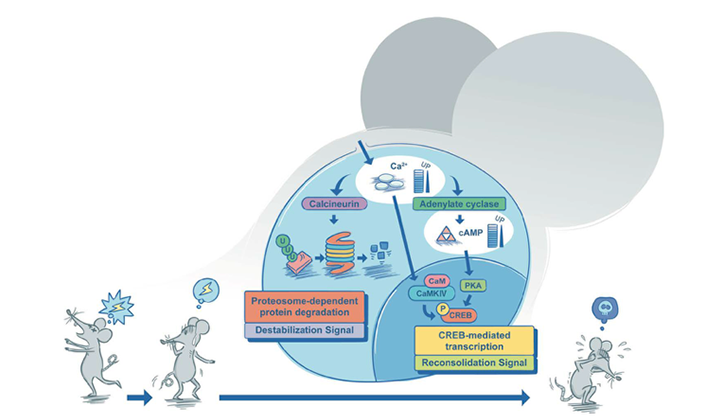 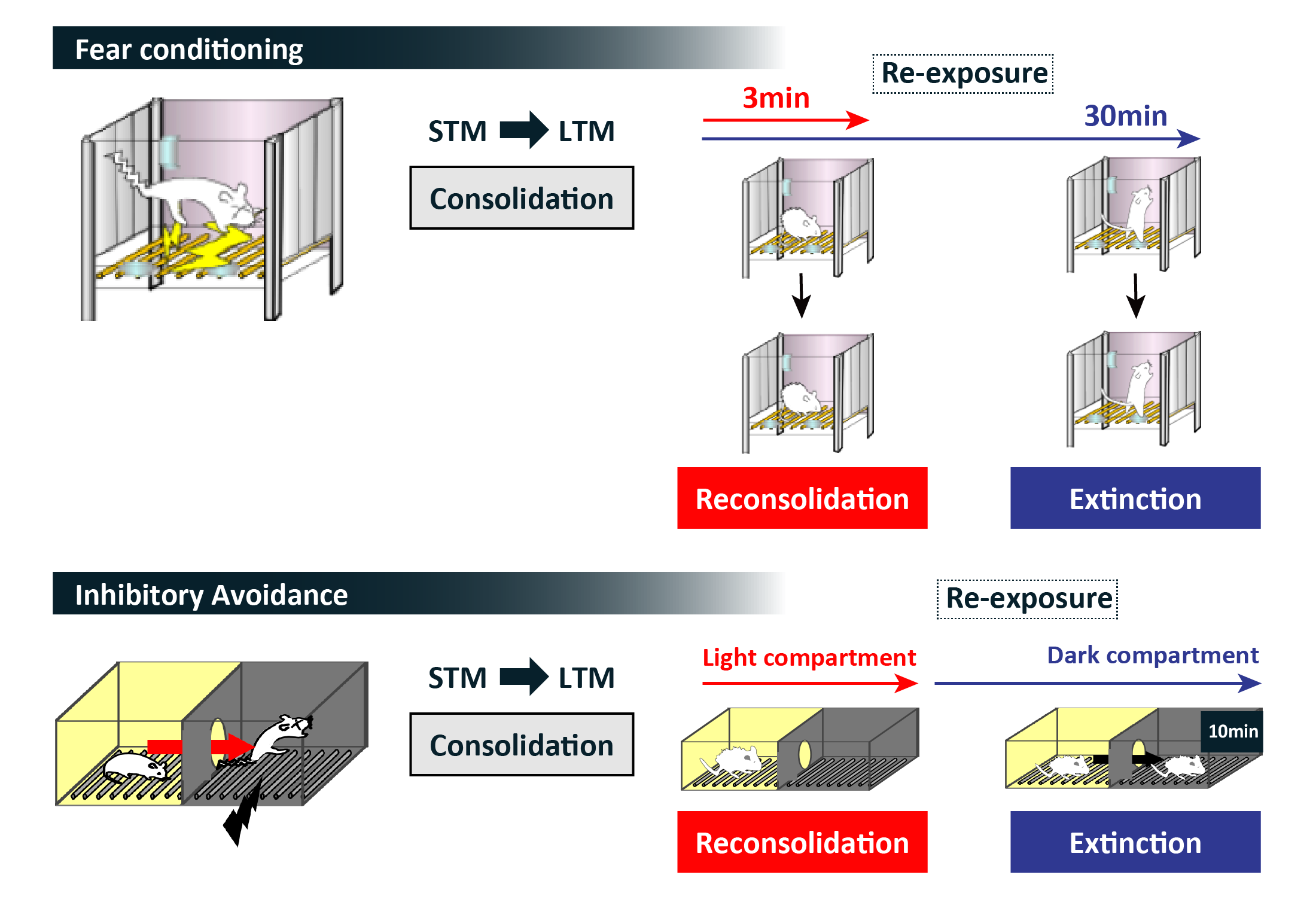 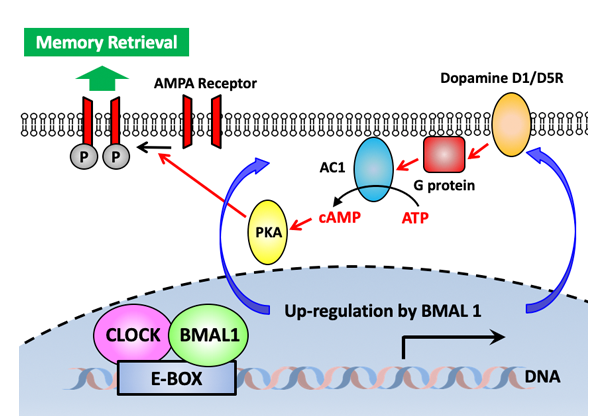 Post-traumatic stress disorder (PTSD) is a psychiatric disorder associated with memories of traumatic experiences. Findings from rodent studies have been applied to the development of PTSD treatment because the mechanisms for fear memory regulation may be similar in humans and other animals. Prolonged exposure (PE) therapy is an effective cognitive therapy for PTSD. The biological basis for PE therapy is thought to involve extinction of fear memory.

A disadvantage of the PE method is that it is difficult to treat a large number of patients because the therapist/physician treats patients through one-on-one sessions over a long period of time (a stressful process for both patients and doctors). Therefore, it is important to develop methods to shorten the duration of PE therapy. Accordingly, the modulation of memory processes such as reconsolidation and extinction is one possible way to shorten the duration of PE therapy. Recently, we proposed that enhancement of memory forgetting using a neurogenesis enhancer could be another therapeutic approach to PTSD because increases in adult hippocampal neurogenesis facilitate the forgetting of hippocampus-dependent memories. This method may enable the development of a PTSD treatment that does not require PE therapy. Importantly, exercise also functions as a neurogenesis enhancer. Therefore, we are screening for other neurogenesis enhancers that can boost neurogenesis without “side effects”. 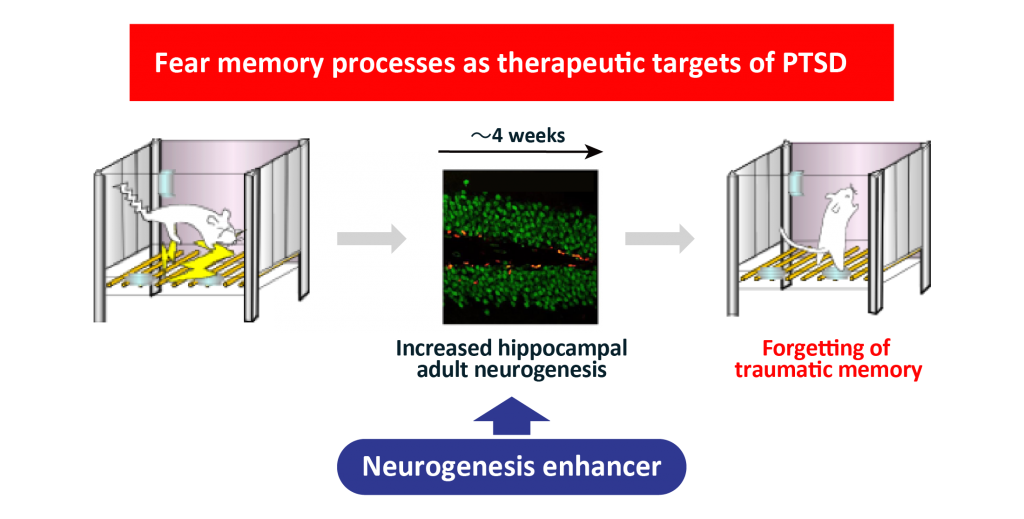 We are investigating the regulatory roles of nutrition and food in brain function and the nutrition- and food-related mechanisms regulating brain function at the behavioral, circuitry, cellular, and molecular levels using various approaches, such as mouse behavior, imaging, biochemistry, molecular biology, and computational techniques. We have investigated and identified roles for vitamin A, vitamin B1, tryptophan, magnesium, and Lactobacillus, among others, in learning and memory in mice. In particular, we have reported essential roles of receptors for vitamin A (retinoic acid receptors; RARs) in hippocampus-dependent memory formation using conditional mutant mice of RARs and concluded that the vitamin A signaling pathway positively regulates memory formation. On the other hand, we have shown that vitamin B1 (B1)-deficient mice show impairments in hippocampus-dependent memory that are similar to Wernicke–Korsakoff syndrome, a disease caused by B1 deficiency in human. Furthermore, we suggested that this B1 deficiency-associated memory deficit is caused by hippocampal degeneration. We also suggested that a nutritional deficiency or reduced nutritional uptake induces neuroinflammation and thereby leads to brain dysfunctions such as impaired memory formation through hippocampal degeneration. We will continue this project and also try to identify nutritional factors and functional foods that enhance cognitive performance. 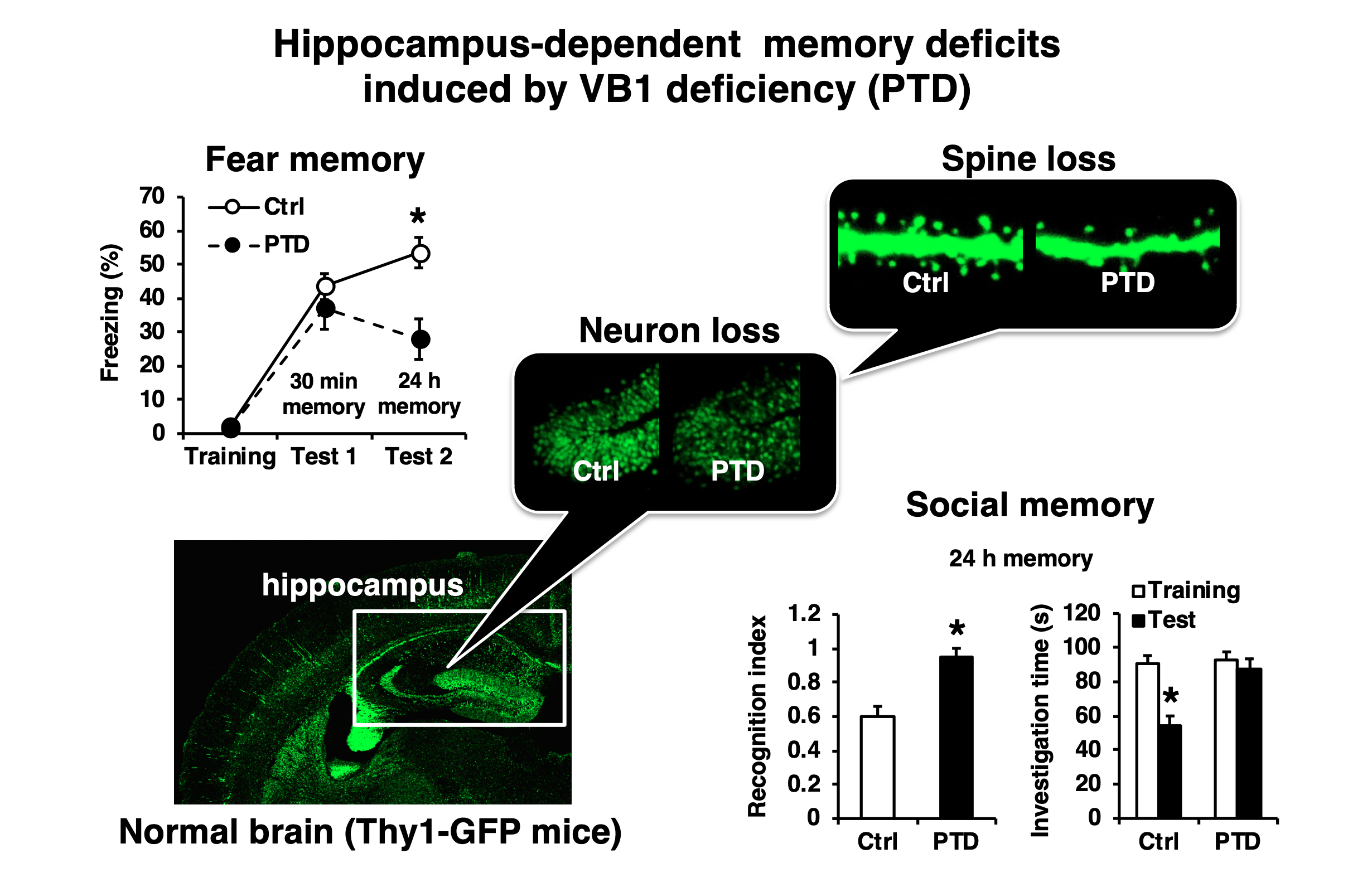 Feeding is required to take essential nutrition and energy. Importantly, this behavior is regulated at not only the physiological, but also cognitive levels. For example, people sometimes eat more under stressful conditions and feel compelled to eat desserts even after a large dinner, and may even still feel hungry. In addition, dietary patterns vary among people and can be environmental factors related to psychiatric disorders and Alzheimer’s disease, as well as metabolic syndromes. However, the mechanisms underlying the regulation of eating habits or patterns by cognitive processes are still unclear. Importantly, eating experiences strongly influence subsequent feeding behavior by altering and/or determining food valence. Food valence is also modified by other factors, such as aging and environmental factors. Therefore, we are trying to understand the mechanisms associated with changes in food valence that are related to memories of eating experiences (known as memory engrams of eating experiences). We hope that this research helps to improve feeding behaviors associated with diseases such as metabolic syndrome and brain diseases. 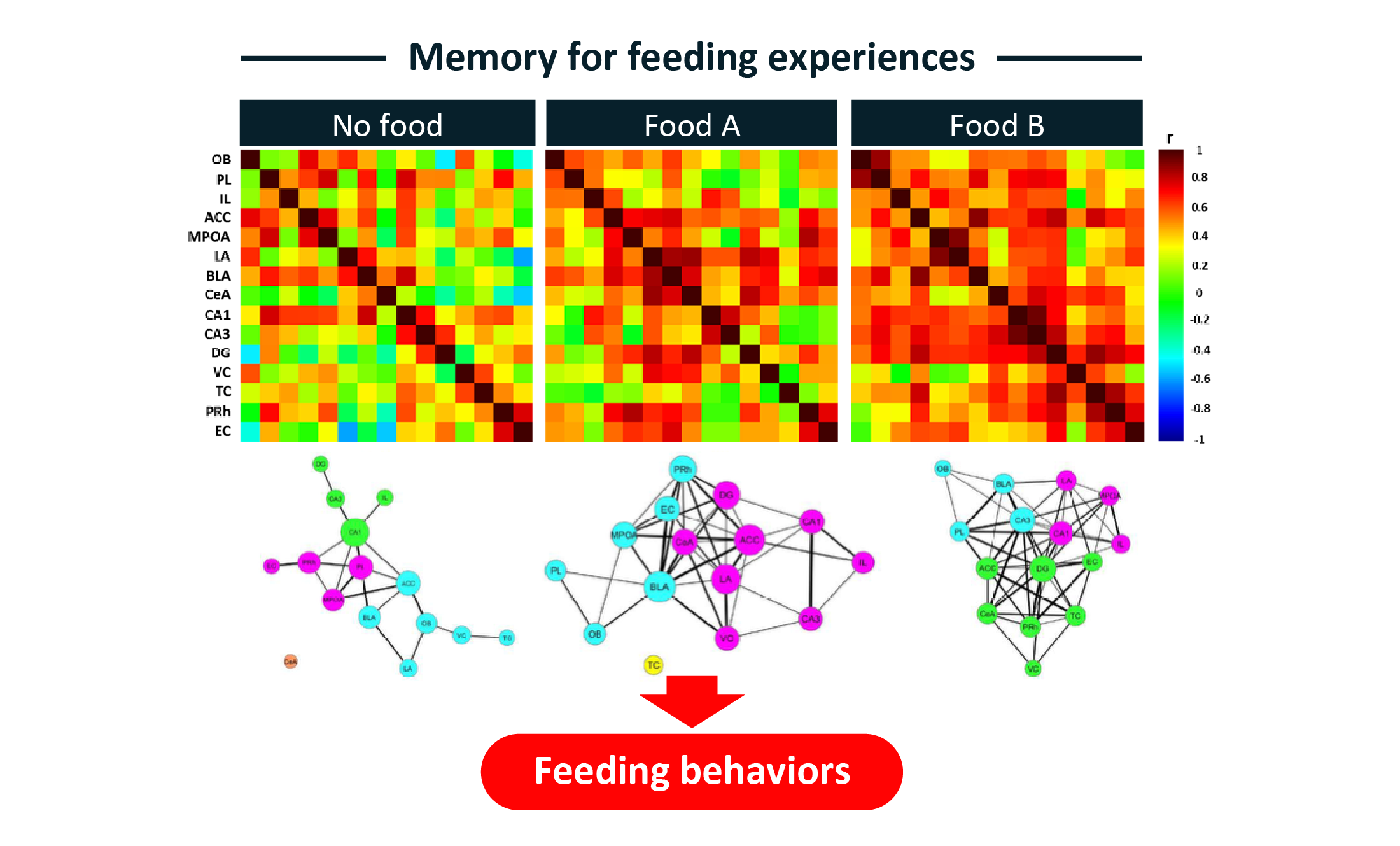